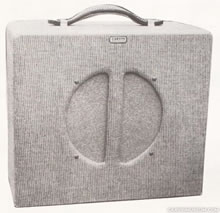 Carvin is unique in the music industry in that they manufacture and sell directly to you, instead of through middlemen. Even back in the fifties, Carvin mailed out print catalogs so you could order directly. Not that catalogs were uncommon then, but you usually had to go to a music store to get your gear.

Just to get an idea of how far Carvin has come, here's a shot of one of the first Carvin guitar amplifiers, straight from Carvin's online museum. Check it out - for $34.90, you got 4 watts of output to an 8" speaker. And that's it - no tone or bass control, only volume and your input jacks. But hey, it got you started, right?

Throughout the 1960's, Carvin continued to design and build bigger and better amplifiers to meet their customer's demand. In 1965, they offered their first solid-state amplifiers, and pretty much stayed with that technology for the remainder of the 60s and early 70's. In 1973, they distributed their first color catalog, and offered both solid state and tube amplifiers.

Most of the Carvin guitar amplifiers from the late 60s to the mid 70s were stack systems, with a head and speaker cabinet. In 1973, they brought back the combo amplifier, which had the controls we've come to expect in amps. Things like treble, bass, presence and gain (although that's not what they called it - they called it "harmonic sustain"). The wattages offered were significantly higher that their predecessors - you could get upwards of a 200 watt head for your needs. 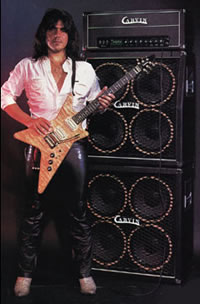 I remember it was probably 1980 or 1981 when I first came across Carvin. I was playing in my first band and money was always tight, being a teenager. Carvin not only had great prices on PA and sound equipment, they had some nice looking guitars as well. I've always been partial to guitars with neck-through body designs, and this is one of Carvin's claims to fame. I couldn't afford their amps at the time, but it was always nice eye candy!

By this time Carvin guitar amplifiers were competing with Marshall, Mesa Boogie and Randall amps in size, power and tone. You could get both solid state and tube amplifiers in combos and head/cabinet configurations.

Nowadays, you've got Steve Vai with his own signature amplifier, the Vai Legacy, which has been offered since 1999. In 2005, Carvin guitar amplifiers made a major change in that all their amps/cabinets are loaded with Celestion speakers. They also introduced the V3, a three channel amp that can run in either 50 or 100 watts. It comes with 5 12AX7 preamp tubes and 4 EL34 output tubes, similar to a Marshall.

If you dig the Mesa Boogie Dual Rectifier tone, you can swap out the EL34s and replace with 6L6GCs for output. And all the Carvin amplifiers can be customized with different color Tolex (the outer covering of the amp or cab) for combos, heads and cabinets.

To check out all of the amplifiers they offer, head over to Carvin guitar amplifiers page. You can even download some oldschool computer screensavers and wallpapers.