Let's talk now about guitar hardware and how this thing is put together to become a piece of rock machinery.

The guitar has been around for over 5000 years in one shape or form, but only within the last 75+ years has it been set up for amplification through electronics. Prior to that the sound was amplified through sound holes in the body of the stringed instrument.

The modern rock guitar as we know it has been around for over 50 years. In fact, at the basic level, there really hasn’t been much change to the guitar. Yea, there are all sorts of electronic modifications you can make to get different sounds out of your axe, but for the most part, you’re dealing with a block of wood, some strings, and some pickups for guitar hardware.

In this section I want to cover the anatomy of the electric guitar. Then I’ll talk about modifications to guitar hardware you can make to change how it sounds.

There are two main parts to a guitar – the body and the neck. Let’s talk about the neck first.

The neck is pretty much the business end of the guitar. Without the fingerboard and machine heads (tuners), you’d have six strings that all sound the same. Many manufacturers use maple for the neck, although other materials have been used. One notable exception is an all aluminum neck.

The headstock is the very top of the neck, furthest away from the body of the guitar. In most cases, this is where the machine heads (tuning pegs) are found. I say in most cases, because there are manufacturers that will put the tuners at the bottom of the body (Steinberger is a good example). Some even go so far as to put tuners on the headstock AND the body (like the B. C. Rich Bich 10-string)!

Depending on the headstock style of your guitar, you can have all of the tuners on one side of the headstock (like a Fender Stratocaster), have three on each side (think Gibson Les Paul), or have a complete hybrid configuration like the Music Man guitars with four tuners on top and two on the bottom of the headstock. 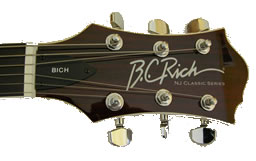 At the base of the headstock where the neck actually begins, you find the nut, which is the block that guides the strings from the tuners onto the neck. The nut is usually made out of plastic, bone, ivory or brass. There are grooves in the nut that position the strings evenly over the fingerboard for their trip up the neck to the bridge.

The strings run over the fingerboard, which is usually made with rosewood or ebony. Fender uses maple for some of their guitar fingerboards.

The strings run over the fingerboard, which is usually made with maple, rosewood or ebony. A standard fingerboard typically runs 22 frets for most guitars, not quite a full two octaves. Higher end B. C. Rich guitars and some others will give you 24 frets (2 octaves) on their fingerboards.

The strings can terminate in any number of different ways. On a Les Paul style bridge, there are two pieces: the Tune-o-matic bridge (which includes the saddle) and the bar stop. You could be set up with a tremolo unit that builds the bridge and saddle into the mechanics of the tremolo. The strings could come up through the bottom of the body (terminating on the back of the body) with a Tune-o-matic bridge (like some Carvin guitars).

This is a good place to transition to the next guitar hardware section...

One of the first guitar makers to create some far out styles is Gibson, with the Flying V and the Explorer. These guitars came out in the 50’s, maybe a little before their time, because they didn’t seem to be popular until the 70’s and 80’s.

Gibson even made one model in the shape of the United States! These were definitely defining guitar hardware styles, though. Redundantly redundant, heh, heh.

Bernie Rico of B.C. Rich decided to take it to the extreme with his line of guitars, from the fairly tame Eagle and Assassin to the wild, wicked designs of the Warlock and Beast.

Guitar bodies are manufactured out of many different materials. Most guitar bodies are made of wood, but there have been bodies made from Plexiglas, aluminum and other man-made materials. Here is more information about the different woods (called tonewoods) used in guitar hardware and how the wood affects the sound of the guitar.

The body houses your pickups and electronics for controlling your tone and volume. Depending on your make and model, there can be additional electronics. For example, there are varitone switches, phase switching, coil cutters, preamps and all sorts of other active electronics guitar hardware you can build in. These electronics are usually custom installs.

Pickups are the devices that "pick up" the vibration from the guitar strings within a magnetic field, which creates a current in a coil of wire. That electrical energy created by the string vibration is sent to the amplifier to produce guitar sound.

There are two main styles of pickups: the single-coil and double-coil, or "humbucking" pickup. The basic design is that a wire coil is wrapped around a magnet or magnetic pole pieces (the six round magnets lined up in the pickup). With a double-coil pickup, The pickup is wired to a volume and tone "pot", or potentiometer. These control the levels of volume and tone output to the amp.

Traditionally at the beginning of rock guitar history, Fender began developing and using single-coil pickups for their guitars. Gibson started with their own single-coil version but has focused primarily on double-coil pickups and typically equipped their models with the "humbuckers".

Also on the body, if you have multiple pickups, you’ll have a pickup selector switch. There are usually three positions on these switches that allow you to choose the neck pickup (for fatter sound), the bridge pickup for leads, or both pickups. These aren't the only selector switches available - for instance, the Fender Stratocaster usually has a 5-way selector switch for its three single-coil pickups.

Some other guitar hardware you'll notice on the body are pickguards, strap buttons and the input port for your guitar cable. All of this guitar hardware can be swapped out and customized, so you can take a stock guitar and personalize it pretty easily. Now you're ready to operate, Doc!

Back to Getting Started