OK, to get the guitar method down, here are some ground rules to help you understand my diagrams. I've modeled them after diagrams you will see in chord books and on musical scores and sheet music, so they should be pretty universal.

I'll start with a quick rundown of the strings. As I go over different notes, chords and scales in this guitar method, I'll use the note of the string tuning interchangeably with the string number. Check this out:

The string on the top of the fingerboard (when you're holding the guitar) is the Low E. In standard tuning the strings are tuned to the following notes: E A D G B e, the second small e (or high e) being two octaves above the first E. We can also notate these strings as 1 through 6, high e being number 1 and low E being number 6.

On the diagrams, you'll see big black dots with either a number 1-4 or a letter. These indicate which finger you will use on the fingerboard. Just to clarify, the fingerboard is the part of the guitar neck with all the silver bars (these are frets) going cross-ways.

The guitar method table on the left shows you which finger corresponds with the numbered dot on the example of a chord diagram to the right.

In the chord diagrams, if the chord or notes fall within the first three to four frets, you'll see a black bar (the nut on a neck) across the top (example on left below). If the chord or note falls higher on the neck, the diagram will just look like a section of the neck (example on right below). The number here denotes the fret you're at.

Most guitars also have dots on the fingerboard to give you an idea where you are on the neck. For example, there is usually a single dot at the third, fifth, seventh and ninth frets. At the twelfth fret, usually there's two dots. Here are some examples found on common electric guitar styles: 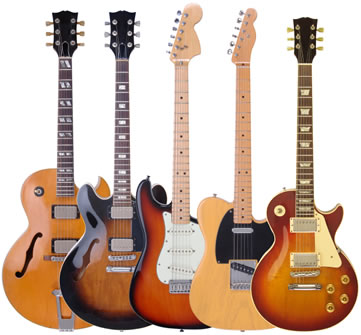 Fretting is a guitar method that refers to finger placement on the fingerboard of the guitar. When I say the "fifth fret" I am talking about putting your finger ahead of or in front of the fifth fret on the neck. This can also be said as the space on the neck between the fourth and fifth fret.

Take a look at this picture showing the A major barre chord, which is played at the fifth fret: 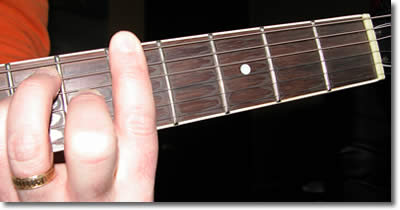 You can see my index finger (1) barring all six strings at the fifth fret in the space between the fourth and fifth frets. What I'm doing is pressing the strings down so the fifth fret becomes the temporary nut on the neck. A capo clamped on the neck does the same thing for you - it stays stationary while playing. You have to stop playing to remove it. That's what's nice about barre chords - kind of like an "on-demand" capo...

If you need to get your guitar tuned up now, you can get straight to the tuning pages by clicking this link.

If you're already good with the basic chords, try out some of the Rock Chord Progressions.

Back to Getting Started