One of the best ways to improve results from your guitar practice is to either play with other musicians or play along to songs you like. When you're just starting out, this can be a little difficult, since you might not be able to break a song down into manageable parts.

For example, the band might have two guitarists, a lead player and a rhythm player. Or multiple guitar parts may be recorded separately then mixed together. So there you are, trying to figure out a song but can’t quite make out the guitar part, or the song is too fast to get the notes. What do you do?

Lucky for you there's some options out there to help.

How would you like to be able to slow a song down so you can hear each note as its played without changing the pitch? You can do that with some innovative software that won’t cost you an arm and leg. Each has some unique features, so you decide which is a better option for you to do your guitar practice.

First off, let’s talk about SloMoDirector. Mike Herberts of the U.K. developed SloMoDirector to help his students learn to play songs quickly. Mike has been making instructional videos for guitar for some time. His main focus has been the blues and classic folk and rock, and he teaches a lot about fingerpicking styles.

Here’s where SloMoDirector comes in handy. You can take Mike’s videos and slow them down to as low as 40% speed without any loss of pitch. In fact, any WMV or AVI video file can be played with SloMoDirector. What’s more, SloMoDirector will also play MP3 audio (which you can see below), so you can jam to your favorite tunes. 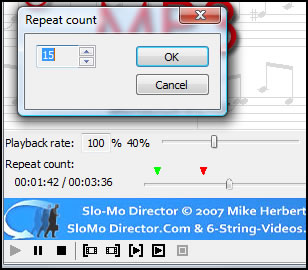 When you find a section of a song you want to learn during your guitar practice, you can set the player to loop over the section up to 15 times so you can get the notes down. This is a really helpful feature – if you've ever tried learning a song that's playing on a computer, tape deck, CD or vinyl album (remember the old days, fellow dinosaurs?), you know exactly what I’m talking about!

I own SloMoDirector, and it has been worth the investment! At less than $50US, I can learn new songs quickly and easily figure out different guitar parts. SloMoDirector has really cut a lot of time off of expanding my guitar practice capabilities. Click here to learn more about SloMoDirector.

(NOTE: Mike doesn't appear to sell SloMoDirector any longer, but he gives you instruction on how to do it for free at the link above.)

Song Surgeon works the same as SloMoDirector, but with some different features. You can still slow down MP3s, but there is no feature to watch video – it's only for audio. Not a big deal though. Most of what you're trying to learn is in audio form anyway. 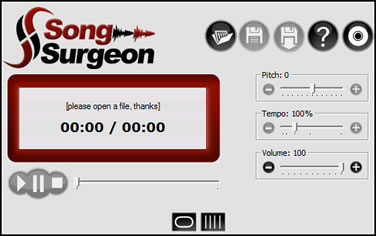 So with Song Surgeon, you can loop sections of a tune and adjust the pitch of the song without slowing it down. There’s no setting for the number of loops, so Song Surgeon keeps playing the loop until you release it.

I don’t see where I would be messing with the pitch of a tune, but someone must have a use for this functionality.

You can slow the song down to as low as 25% of it’s normal speed. I tried this out with the demo, and truthfully, I don't know if you’d ever slow a song down that much, but hey, it's available if you need to get that slow.

A very useful and nice-to-have feature is the built-in equalizer. You can isolate different tracks (guitar, vocals, drums…), making it easier to learn a song part during your guitar practice. You are able to save any equalizer presets you create. This functionality worked pretty well.

If you have your music on CD, Song Surgeon allows you to rip the songs to your hard drive. I can imagine this would improve playback performance, since you're not having to wait on a CD-ROM to spin up.

Normal pricing for Song Surgeon is $70US, so it’s a little stiffer than SloMoDirector, but the equalizer and ability to rip songs from CD are worth the difference in price. If you don’t have videos you're trying to learn from, this will be worth your while. You can watch the free demo videos online and see how well it works. Check it out for yourself here and get a free gift just for looking! 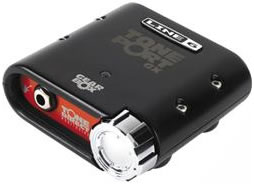 The ability to slow a song down is also available with hardware. I have the low-end Line 6 Toneport GX, use it daily for playing through my computer. Because it's a "modeling" device, it has many different guitar and bass amp, cabinet and effects choices.

In my guitar practice, it’s easier and more versatile for me to use this than to plug into my amp.

Line 6 has a subscription service called GuitarPort that allows you to download hundreds of lessons and amp settings for different songs, complete with sheet music and tabs. Just some examples of artists featured are Eddie Van Halen, Alex Lifeson of Rush and Eric Clapton. Something for everyone!

To slow music down, the Toneport works well. Choose Full or Half speed, which seems to be slow enough to learn most songs.

You can also set up looping easily, with unlimited loops.

A key feature to help with your guitar practice is recording capability. The Toneport feeds directly into recording software such as Audacity or ACID Xpress, which are both available for free. This way you can record your guitar practice session and play it back to evaluate your progress. It also allows you to catch any cool riffs you might come up with. This can be especially handy when you're writing songs.

Standard pricing for GuitarPort is about $8US per month. This is a separate add-on service to the Toneport device which runs $90US list price. This is the low-end "affordable" model. You can spend hundreds of dollars for fuller-featured interfaces, or even buy a complete modeling amplifier. Check out what Line 6 offers for your guitar practice and modeling needs.

That said, I’m glad I have both. I like to be able to play and record guitar through the Toneport and have SloMoDirector playing the song I’m learning. It would be nice if SloMoDirector had the equalizer like Song Surgeon, but I’ve lived without it. The Toneport does have an equalizer built in, but this is an effect for your guitar, not the player.

All-in-all, probably the best deal for the money is the Toneport given all the features and assortments of amplifiers and effects. As a guitarist just getting started, this is a good way to really figure out your sound without laying out a bunch of cash. These tools all work well for guitar practice, and they’ll each help you get to the next level of play.

Back to the Guitar Gear page...