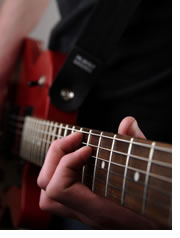 This section is all about learning to play guitar chords. Why learn how to play chords? Guitar chords provide the "meat" behind the melody of the song.

Usually the rhythm guitar player, bass player, keyboard player and drummer set the platform for the singer and lead guitar player to soar.

This isn't written to take away from the importance of rhythm guitar, keyboards, bass and drums; on the contrary, without the support foundation these players build, the singer and lead guitar would fall flat. 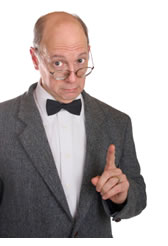 Without getting into music theory and really muddying the water, chords are just a combination of notes played together at the same time.

While I thinks it's a good idea to understand the theory behind how chords are put together, I'm not a music professor. Yea, I've taken some lessons, but never a theory class. They only covered the basics in elementary school, ya know!

There are many excellent sources out there for learning music theory. To learn guitar chords in general, you don't really need to know the theory behind the structure. I'll leave that type of instruction to those really smart folks.

Speaking of really smart people, an excellent resource to learn music theory are my friends over at Music Learning Workshop (cuz face it, once music gets in your blood and soul, you're gonna want to understand what you're doing).

At Music Learning Workshop.com you'll find an ever expanding range of music learning, music theory topics and lessons starting with the basic fundamentals of music theory including how to accelerate your learning process and getting it down cold workbooks.

When you hear references to Triads, these are just chords with three notes in them (OK, it's a bit more complicated than that, but like I said, I'm not the "Professor!"). There are tons of resources out there to learn about triads - If you want to get a more in-depth explanation, check out my friend Jim's discussion at Learn Fingerstyle Guitar. He can give you the scholarly rundown...

Here's a nice little tool to learn the musical staff notation not only for triads, but for guitar notes and simple theory. This website offers up music theory flash cards that can help give you a head start in reading music. Pretty cool!

The action (the space between the fingerboard and string) is also typically lower on an electric, depending on the setup and quality of the guitar. This lower action makes it easier to press the strings down to the frets when you play the chord. This can make learning guitar chords less frustrating in the beginning. But I will say, learning to play guitar chords on a cheap acoustic guitar does help you strengthen your fingers pretty quickly! 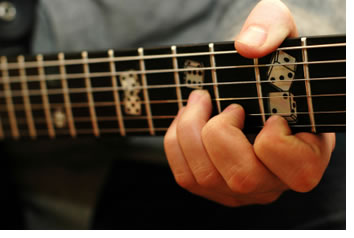 Because we're here to learn rock guitar, I'm going to focus on the main chords you will be using. These will primarily be major and minor chords. We'll look at both open and barred chords (don't worry, it's covered in here).

Au contraire, Mui Droogies (from "A Clockwork Orange" - loosely translated means "My Friends" in Russian - betcha never thought you'd get a Russian lesson here, did ya?!).

Rock guitarists jump off all the time, but that doesn't serve our purpose here of getting you rocking out quickly. Once you're comfortable as you learn to play guitar chords, you can start experimenting with variations of each major chord.

One last thing - I wrote an article suggesting a simple approach to learning guitar chords that might help you.

When you're learning to play guitar chords, what better place to start than the A chords? A major has a great sound. Really easy to play, too. Bowling For Soup kicked off "High School Never Ends" (The Great Burrito Extortion Case) with an A major chord.

The B major chord was the first bar chord that I attempted learning on my old acoustic. Definitely not as difficult to play for the first time on an electric guitar! Boston starts off their song "Feeling Satisfied" (Don't Look Back) with a B major chord.

Digging back into some favorites from the early 80s, The J. Geils Band started the classic "Love Stinks" (Love Stinks) with a C major chord. From something a bit more modern, blink-182 used the C chord to start off "Adam's Song" (Enema of the State). When learning to play guitar chords, C major is one of the first ones learned because so many songs rely on it.

D major has been the intro chord into a lot of rock classics over the years. You can hear the D major chord at the beginning of Rush's "Fly By Night" (Fly By Night) and Queen's "Crazy Little Thing Called Love" (The Game).

The E chord is a major power chord. Also one of the most important chords to focus on when learning to play guitar chords. One of my favorite ballads by The Eagles starts with an open E chord - "New Kid In Town" (Hotel California).

I first came across a variation of the F major chord in Led Zeppelin's "Stairway To Heaven" (Led Zeppelin IV) while learning the intro finger picked section of the song. Def Leppard also used an F major to start their song "Let's Get Rocked" (Adrenalize).

Once you have the standard chords learned, you'll need to become familiar with the chords in the "Drop D" tuning. While you're learning to play guitar chords, you will find many songs that are played in this alternate tuning. Rock guitarists will use this tuning for a heavier, beefy bass tone. Here's a guitar chord chart for the "Drop D" tuning.

Sign up for the "Learn To Play Rock Guitar!" Newsletter - you'll get updates, lessons and cool tricks delivered right to your email! I'll even hook you up with FREE printable chord charts, including Drop D Tuning (my most popular 'alternate tuning' request!).

Let's kick off this party with the A chords!