Are your fingers bleeding yet? Are these easy guitar lessons chords wearing you down? Are you seeing chord diagrams in your dreams? Don't worry, we’re coming down to the end of the easiest rock chords. Are you ready for F major? Let’s do it! 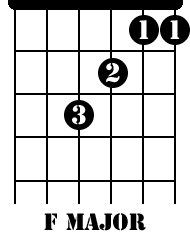 F major in the open position starts with your index finger barring the first and second strings (e and B) on the first fret. On the third string (G), place your middle finger at the second fret. Press your ring finger on the fourth string (D), third fret. Strum from the open A string (fifth string) all the way through.

The great thing about this chord is you are already set up for the first bar chord position, which is right there on the first fret. See, I’m trying to make these guitar lessons chords as easy as possible!

Barre all six strings with... wait for it... wait for it... That’s right, your index finger. Your middle finger goes on the third string (G) at the second fret, and your ring and pinky fingers are pressed on the fifth and fourth (A and D). 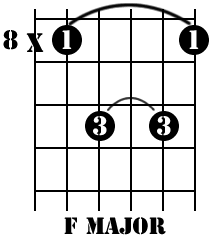 One more F major chord. Move up to the eighth fret and bar the first through fifth strings (e through A) with your index finger. With your ring finger, bar the second, third and fourth strings (B, G and D). 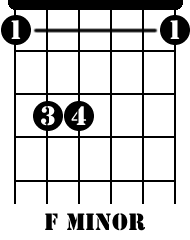 F minor in the first barred position is again at the first fret. Barre all six strings with your index finger. Your ring and pinky fingers go on the fifth and fourth strings (A and D) at the third fret. 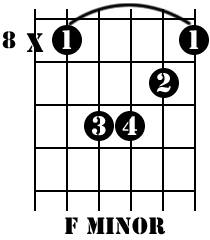 In the last barred position we’re doing for Fm, move your index finger up to the eighth fret and bar strings one through five (e through A). Press your middle finger on the second string (B) at the ninth fret. Press your ring and pinky fingers on the fourth and third strings (D and G) at the tenth fret.