The E chords are great guitar chords for beginners. Just like most of the other chords we're learning here, E major comes into play with a lot of songs. 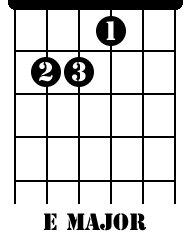 Open E major starts with finger positions on the third, fourth and fifth strings. The low E string (number 6) will be played open. Place your index finger on string number 3 (G) at the first fret. Press strings five and four (A and D) at the second fret with your middle and ring fingers, respectively.

Crank up the gain on your amp for some bone crunchin’ distortion and hit those strings. That’s a powerful chord!

You can also mix it up and play an E major barred at the second fret. Bar the first through fifth strings (e through A). Using your ring finger, press the third string (G) at the fourth fret. Press your pinky down on the second string (B) at the fifth fret. Strum all six strings, since the first string is an open E.

Em in the open position is super simple. Just set up for an E major and then lift your index finger off the third string (G). All you’ll have left is your middle and ring fingers on strings five and four (A and D). Done!