As you learn to play rock guitar, a guitar chord chart can come in handy. It's pretty easy to find charts of chords in standard tuning, but when you need to know how to play chords in a "Drop D" tuning, it gets a little tougher to find a good chart.

There's nothing too difficult about playing chords while tuned to "Drop D", but it's helpful to have a decent reference to look at when you're learning the chords. You're going to see these chords quite a bit in your punk/emo and metal genres, so get familiar with the tuning and the chord positions.

When you play these chords, you play them like power chords - just the 4th, 5th and 6th strings (Low E, A and D with standard tuning). It's going to sound best with the overdrive/gain cranked on your amp for some heavy distortion. Oh yea!

You can get a free printable copy of this guitar chord chart here.

If you need a reminder of how to read these tab charts, take a quick look at the ground rules. 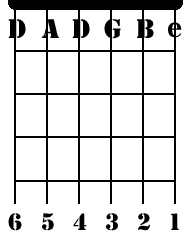 To get you started, get tuned to "Drop D" here. Just use the drop-down arrow in the lower right-hand corner of the Tune-O-Matic tuner to choose the Drop D tuning. This is the base Drop D tuning chart for each string:

Next, we'll walk through the neck positions for the chords you'll find in your rock songs. Each has a guitar chord chart so you can "eyeball" it easily. Let's start with the open chord D Major. 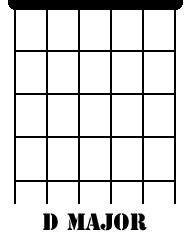 The easiest guitar chord chart. Just play the top three strings open (D, A, D). If you want, you can mute the bottom three strings (G, B, e), but you don't need to. 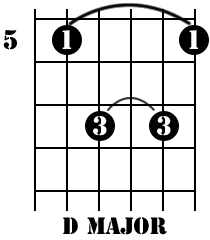 You can also play the D chord at it's normal barred position at the fifth fret, but now you can play the sixth string open (instead of muted) for a deeper tone.

For the E Major chord, barre the top three strings at the second fret. Almost as easy as the D Major.

For F Major, simply move your index finger to the third fret for the top three strings.

G Major is the same three strings at the fifth fret. 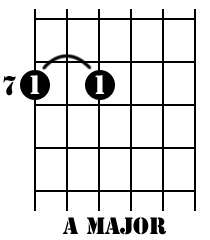 OK, are you getting the pattern yet? Yup, move up to the seventh fret...

Index finger across the ninth fret for B Major.

Last but not least is C Major at the tenth fret.

Subscribe to the "Learn To Play Rock Guitar" Newsletter. Each month or so I'll send you new beginner rock guitar lessons and info to help you reach your "rock star" goals. So put down "Guitar Hero", pick up your axe, and let's get busy learning how to play guitar.

Sign up below and I'll hook you up with a FREE printable chord charts, including Drop D Tuning (my most popular 'alternate tuning' request!) Are you ready to go? Rock on, let's play guitar!

Back to the Rock Chords page...
Back to the Learn to Play Rock Guitar homepage