One of the most common challenges I get asked about are playing barre chords. People don't have any problem understanding what they are, but getting that index finger to press all five or six strings down can be a real bear. So for you people with this challenge, listen up - I'm going to give you some pretty easy tips to help you out!

Admittedly, when I started out playing barre chords was a challenge for me, too. Because I didn't know any better, I was only aware of barring for B major/minor, and I had nightmares about F major (just kidding). It didn't help that I had a low-end acoustic guitar with horrible action, so my fingers were already getting a workout just playing regular open chords.

One thing you can do right away to help yourself is to use lighter (lower gauge) strings. This is especially true with an acoustic guitar, as the string gauge is typically heavier than on an electric guitar.

When you go to buy strings, packs are usually referred to by the lightest string (thinnest) in the pack. For example, if the high e string (first string, thinnest of all six) is .008 gauge wire, the set is referred to as "eights". If the e string is .010, the set is called "tens". You get the picture.

If you're just starting out, use "eights" on an electric guitar, and for acoustic you'll use "tens".

Another factor to consider when playing barre chords is the string action. With an acoustic guitar, the action tends to be a little higher than on an electric guitar. Because the string height is a bit higher with an acoustic guitar, it will be tougher to play chords in general. You will need to toughen up your finger tips and strengthen the muscles in your hands a bit.

Action is usually easy to adjust on an electric guitar, as you typically have an adjustable bridge. Not so with an acoustic. If you find the action is too high, go to your local music store and have their guitar tech take a look to see if there's anything he can do to improve the action. He may be able to help by making adjustments to the guitar neck or bridge.

Enough of the technical's for now. I know you're chompin' at the bit to start playing! 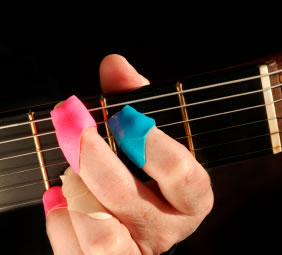 I will give you some exercises to help strengthen your index finger, but for now, I have a cheat for you. As a temporary stop-gap to playing barre chords, start off with power chords (also known as "five" chords). Power chords only require you to press down on two strings, using your first and third fingers (you don't play the remaining strings).

Power chords are used a lot in rock music, especially when the guitar is distorted. You get an awesome low end sound to your chords (almost a growl), and power chords changes can be done quickly. For the most part you're only bouncing between the three lower strings (six, five and four, or E A D).

So you're still using your index and third finger, but applying pressure across all the strings with your first finger.

Hold that chord and slowly play each string, making sure each strings sounds clear - no string is muffled. Start from the low E (thickest string) and individually pluck each string. If a string note doesn't sound clear, try to press a little harder with your index finger, but don't hurt yourself.

If that's still too hard to do, try this exercise. Try just a barre at 12th fret; this is at the octave and should be easier to hold as long as the guitar action is decent. Place your index finger across all six strings and hold that position for ten seconds. Strum the strings with your other hand or pick, making sure that you apply enough finger pressure so the strings ring clear.

Once you are comfortable and sounding good at the twelfth fret, move your index finger up to 9th fret. Hold for ten seconds and strum, again making sure the strings ring out clear and un-muffled. Then repeat at the seventh fret, the fifth fret, the third fret and finally the first fret. By the time you've moved to first fret, your index finger will have had a pretty good workout.

Repeat this exercise over the next few days and you should see a huge improvement in your finger strength. At any point you feel comfortable, add in your third finger (the power chord exercise). Don't be concerned about the second and fourth finger positions in the chords yet. The point of these exercises it to strengthen your index finger and get your hand used to some of the finger contortions.

Following these simple exercises should have you playing barre chords in no time. They're not all that hard once you get past the odd positions you have to put your fingers in. While the fingerings are a bit un-natural at first, you'll adjust quickly and be able to play them like they're second nature.

Let me now if you have any questions about playing barre chords. Hope that helps - rock on!

Back to the Rock Chords page…

Disclosure: Learn To Play Rock Guitar is potentially compensated for any product reviews. Also, if you choose to support this site by clicking links to advertisers, there may be payment.Click here for details.