What do you look for when choosing a guitar amplifier?

If you read the discussion on guitars, a lot of times you're drawn to the same type of amp model as the guitarists/bands that you like. Many times in interviews (guitar and music related), these artists are asked about the gear they're using. Sometimes you'll get some valuable insight into how they create their tone. You might also get ideas from them on choosing a guitar amplifier and other gear.

The more you surf the internet and read magazines, the more you'll begin to know which gear is popular and why. You'll recognize the big guys like Fender, Marshall, Vox and so on. You're also going to see advertisements and articles with musicians who have endorsement deals with manufacturers to promote the gear...

Just look at the recent release of both the signature "Slash" Gibson and Epiphone Les Paul guitars. Notice that in the background of most promotional materials, there's Slash standing there with his Marshall stacks. You have Eddie Van Halen with his "EVH" line of amplifiers. Steve Vai has the Legacy amp line manufactured by Carvin.

Huh? Heads and cabs? Combos? Stacks? What the heck is this guy talking about? What's all this got to do with choosing a guitar amplifier?

Sorry about that – I get really excited talking about this stuff. I guess some definitions are in order. Let's start off with the combo amp. 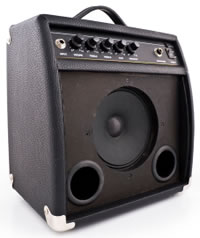 A "combo" unit is simply the amplifier electronics and speakers built into the same cabinet. The micro-amps we talked about earlier can be considered combo units, but in most cases, you'll have larger speakers. Usually 10" or 12" speakers, usually in one or two, and sometimes four speaker configurations.

A "head" is a cabinet housing the amp electronics without any speakers. With this you will add a speaker cabinet. Guitar amp speaker "cabs" typically come in one, two and four 10"-12" speaker configurations. You also have open and closed backs, which will contribute to your sound.

Typically, a single, four speaker cab with a head is considered a "single stack". Add another cab and you have a "double stack". There's nothing quite like having a full Marshall or Mesa Boogie stack behind you - a true beast when choosing a guitar amplifier rig! You'll finally be able to drown out your drummer once and for all, heh heh.

Of course, when you become the rock star you're meant to be, you have the "wall of sound", with multiple cabinets stacked high and wide behind the band (think Van Halen or AC/DC)! By then, you'll be a pro at choosing a guitar amplifier.

Combo units will tend to be a little less expensive than buying a separate head/cab setup. This is because the manufacturer uses less materials to build the amps. These amps are good for studios, practice rooms and for gigging at small to mid-sized clubs. If you're planning on playing larger venues or outdoor gigs (hey, aren't all us rock stars planning on that?), you may want to hold out and get the head/cab unit. Just have a big line of credit or wad of cash – ACK!

How DO I Choose a Guitar Amplifier?

So all these definitions are great, and knowing what amps Kirk Hammett or Zacky Vengeance dig are all well and good, but at the end of the day, you gotta start with something. I talked about the money issue with cheap guitar amplifiers and alternatives, so let's not worry about costs here. 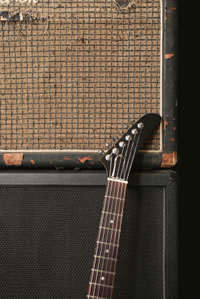 From the big name standards to the boutique style amps, rock guitarists usually choose their amps based on what kind of music they're playing and the tone they need for their sound. I'd like to say there's some method to the madness of choosing the ideal gear, but it all comes down to you (yea, you knew I was going there). Different amps, different tones...

Bottom line is that starting out, you don't need anything great – just functional. Choosing a guitar amplifier that is low cost and within your budget doesn't mean buying any old piece of junk. There are many decent, inexpensive guitar amps that have a good, clean sound.

It's more important to be able to hear what you're playing than to worry about crunch and effects and muddying-up your sound. You can always add a pedal or upgrade the amp once you have the basics of playing down. You can read more about how to go about choosing a guitar amp here.

As you learn to play, you'll start developing an idea in your head what tone you want to achieve. The first amp probably isn't going to get you that sound, but it's serving an important role in helping you find that tone. As I've said before, you have to start somewhere.

For example, I started out with a Fender tube amp head (I don't remember what model it was) and some cheap, no-name speaker cabinet. There were two reasons I went with that setup: A) I needed something, and 2) I could afford it. This was a short-term solution so I could play in my band. I added a distortion pedal to complete the bare rock necessities.

After I raised some cash, I traded that gear in and bought a used Lab Series L5 combo. I was choosing a guitar amplifier this time based on more built-in features and power.

The Lab Series is a solid state, two channel 100 watt amp with two 12-inch speakers. Distortion built in. This also had a spring reverb tank – when I kicked the amp, it sounded like thunder. I used to play "Chain Lightening" by .38 Special over and over again just so I could kick the cabinet. Cool! It was a great amp, but wasn't my ideal tone. They don't make Lab Series anymore, but you can find them if you look. I'd definitely recommend these amps. 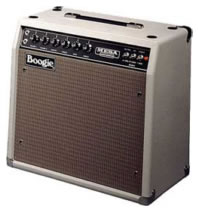 After a while, I finally bought a new guitar amp – a Mesa Boogie S.O.B. "Son of Boogie". The little brother of the original Mark I.

This thing cranked! At "only" 60 watts with a single 10-inch speaker, it was as loud as a full-sized Marshall stack. This all tube amp had incredible tone. It was short on effects, but gave me the warm, tube overdrive I was craving.

The whole point of that history lesson is you sometimes have to take progressive steps when choosing a guitar amplifier. When I started playing, I didn't have Mesa Boogie in mind as the ideal amp with the ideal tone. Heck, I didn't even know Mesa existed. I needed to find out for myself by testing different amps and developing that mental concept of my tone through playing.

It's likely you'll travel the same path. Get yourself a starter amp (again, used is OK), and as you get better you can graduate up to the next level within your budget and style.

Here are some guidelines for choosing a guitar amplifier that's right for you.

Once you have your new gear, here are some tips for keeping that baby maintained...