I had some good luck finding songs for the electric guitar chord progression of G-D-C for the initial roll-out of this page. This is a very common progression in rock & roll music. This progression tends to be found in more upbeat, feel-good type songs.

As you are starting out, play the chords in the open positions. The chord changes will help with your speed, and they're easy chords to play (after you're comfortable with the G major chord – that stretch for the pinky finger takes a little getting used to). 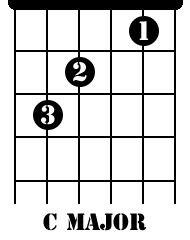 For the tabs to practice, I've got representation from alt rock to hair metal and punk.

"Talk Dirty To Me" by Poison

This is a another example of an upbeat tune using the electric guitar chord progression of G-D-C. The faster tempo keeps you rocking – just another 80's Hair band classic! Tabs for "Talk Dirty To Me" by Poison here.

"The Bitch Song" by Bowling For Soup

Hey, we've all been here! This is a great tune off the "Let's Do It For Johnny" album that really talks to that special someone – just kidding. It's a good song to practice for repetition of the G-D-C progression. Get "The Bitch Song" by Bowling For Soup tabs here.


Back to the Chord Progressions Page...