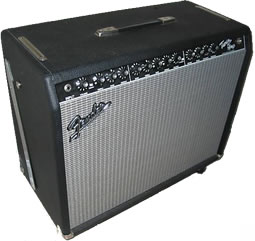 Fender amplifiers are the grand-daddies of so many other guitar amps. It's amazing to learn how many of the most well-known guitar amps had their start as a Fender ampl.

Start looking up the history of your favorite amps, and inevitably there's an old Fender amp in the story that either got tinkered with and modified or torn apart to learn how they work.

From Jim Marshall starting with a Fender Bassman® amp and modifying it, to Randall Smith soupin’ up a Fender Princeton® amp to create the "Princeton Boogie", as he called it – the first Mesa Boogie amps. You might say Leo Fender influenced the base tones of almost every other guitar amp builder out there today. Maybe that’s a bit of a stretch to say, but it sure seems like it.

Leo Fender started out his company inventing the solid-body guitar, which led to developing the Telecaster®, the first mass-produced solid-body electric guitar.

Fender began building amplifiers in 1949, starting with the Super Amp®. He followed this with the Fender Bassman®. The Bassman® was built to handle another of Leo Fender’s inventions – the Fender Precision Bass®.

Get more history about the Fender company here.

As far as pricing goes, there's a Fender amp to fit most budgets, ranging from around $100US for a micro-amp to $3000US for a vintage "'57 Custom Twin-Amp®" reissue. You can check out all the specs on the Fender amplifier models here or shop right there on the site. They also link out to retailers if you have one you prefer.

Eddie Van Halen started a partnership with Fender in 2004 and created his signature company (EVH®). His 5150 amplifier is built by Fender, although this model was originally made by Peavey (back in 1992). Eddie and peavey parted ways in '04 and Fender picked up the production. Check ’em out here if you dig the sound and have a few thousand dollars to drop.

The Fender Musical Instrument Company has been one of the few that held it together through the years while so many other companies went bankrupt and disappeared. They continue to be strong to this day.