Fret buzz is an irritating sound from one or more strings when you pick or strum the strings on your guitar. As you're starting out, it may not bother you – you may not even notice it. But as your playing improves, you'll know when something isn't quite right. And it'll bother you!

Fret buzz can be caused by a number of different things. It could be as simple as needing new strings. After a while, a film of dirt and crap accumulates on the string. This layer of oil, sweat and dirt can build up enough to steal away the necessary clearance between the string and the frets.

If you keep the strings and neck wiped off, you can prevent fret buzz caused by dirt. It also helps to keep the fingerboard clean so the grime doesn't build up between the frets. Sometimes a little wood cleaner and a soft cloth can go a long way. Just be careful you use a cleaner that's safe for wood.

If that doesn't cure the fret buzz problem, you may need to have some adjustments made to your axe. Some adjustments you can do, but they're a bit tricky when you're doing them for the first time. In fact, ask anyone whose been playing for a couple years or more, and they'll likely tell you to just have a pro guitar tech take a look at it.

This will save you from possibly making a huge mistake and destroying your guitar. OK, maybe a little extreme, but I'd still consider splintering your guitar neck pretty heinous. Especially if you've got a neck-through body style. You might as well just kiss your baby goodbye… 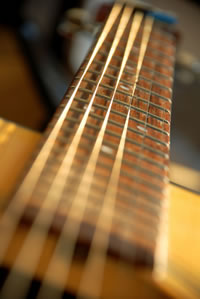 If you're hell-bent on fixing fret buzz yourself, you need to figure out where the buzz is. Does the buzz occur when the open string is played?

This might be corrected by removing your strings and adding a shim under the nut to raise it a hair. You want to do this in thin layers of paper or foil, one at a time. If you raise it too high, the action of the strings will suffer. It'll get harder to play. If action is too high, you can cut down the string grooves in the nut. But then you wouldn't be having fret buzz, now would you?

Of course, the grooves in the nut could be worn down too low (causing buzz), so you need a new nut installed. This isn't a hard repair to do, but probably left to a pro the first time around.

The other potential fix for a fret buzz that's close to the nut (probably anywhere from the middle of the neck to the nut) is to have the truss rod adjusted. DON'T DO THIS YOURSELF THE FIRST TIME!!! You definitely need to have a guitar tech at your local music store take a look at it. The adjustment process is pretty easy, but turning the truss rod too much or in the wrong direction could mean the end of your guitar's neck!

Watch the tech (if they'll let you) as s/he does the adjustment and ask questions. Take notes, too. This way you get to learn how it's done, which can save you a trip and some money if you run into the problem again. You also save yourself a potentially expensive mistake!

If the fret buzz isn't apparent when the open string is played, start fretting the string at the first fret and pluck it. Move up the string one fret at a time until you find the buzz. Again, anything from the middle of the neck to the nut needs some special help.

Fret buzz between the middle of the neck and the body? You'll need to adjust the string's saddle up (so the string moves up away from the fingerboard), increasing the action a little at a time. If you end up adjusting too high and still have buzz, you're probably back to a truss rod adjustment.

It could also be a fret that needs to be sanded a bit. Not something you want to do on your own without some training… Sand too much and you risk ruining the fret and pitch at that fret. Then you have to have someone replace that fret – AARRGGHH! To identify which frets might be causing you pain, here's an interesting approach over at StewMac.

A great reference for fret buzz issues, causes and repairs, check out Fret Not Guitar Repair. There's a wealth of information for any set up or repair question you can imagine.

Here's an awesome instructional video from FPE TV on how to correct for fret buzz on an acoustic guitar. Eric from Eric's Guitar Shop goes into exact details on truss rod adjustment, cutting down the nut and adjusting the saddle. If this doesn't convince you to have a pro do it, have at it - just don't say I didn't warn ya!

As a final note, try this stuff only if you're brave and can afford to take the hit should you mess something up. I'd still recommend having a professional guitar technician set up your guitar properly and repair any annoyances, especially if your axe is vintage or expensive to replace. It's worth the money spent. If you happen to have a cheap model to practice on, OK - it can be a great learning tool. Just be careful!

Back to Guitar Maintenance...