Music Man Guitars is yet another company that managed to pull itself out of failure. It didn't actually start out as Music Man - The original name was Tri-Sonic, Inc.

Founded in the early70's by Forrest White, Tom Walker and Leo Fender (yeah, THAT guy), the company's first product was an amplifier that took advantage of a hybrid tube and solid-state design.

It was in 1974 that the company became Music Man, offering said amplifier. Shortly after, Music Man offered the new Stingray bass guitar. At the same time a guy by the name of Sterling Ball became heavily involved in instrument design. You might recognize the last name - Ernie Ball (Sterling's dad) is the guitar string and accessory company that also owns Music Man guitars.

The Music Man website used to have a timeline and slide show of significant events in the company's history. It listed out when various signature models were introduced and showed photos of the key players in the company's growth, but alas, the timeline is gone...

For what appears to be a more complete story, there's the Music Man Guitars Wikipedia article. However, this story highlights a lot of the drama that threatened the company's survival. Apparently low sales and conflicting partnerships really took a toll on the health of the company. Interesting read, though. 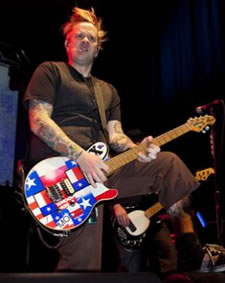 Truthfully, Music Man bass guitars seem to be bigger sellers than the standard guitars. Between the Bongo, Sterling, and Stingray models, many bass players have chosen to play Music Man. In fact, the Stingray bass was the first production guitar that did well for the company.

To get a run down of all the artists that use Music Man guitars, use this link to their website. Most of the profiles detail which model these rockers use.

There are three basic designs in the Music Man stable - the Albert Lee, the Axis and the Silhouette. Most of the signature models are fashioned after the Silhouette design. Since the company has its origins with Leo Fender, it's only fitting that the guitar designs bear some resemblance to the most famous Fender designs - the Stratocaster and the Telecaster.

While the body designs are similar to the Fender models, that's where the similarities end. Many Music Man models feature a maple top with a mahogany or ash body and some pretty nice finishes. They typically have humbucker pickups and active electronics.

The Silhouette gets its inspiration from the Strat body. It features a bolt-on neck with the unique 4 and2 tuner configuration on the headstock (a Music Man standard). You also get humbucker pickups as well as a single coil pickup in the center position. The John Petrucci, the Luke, the Steve Morse and the Benji Madden Signature Models use the Silhouette body style.

The Axis is inspired by the Telecaster. Music Man used the Axis design for its 25th Anniversary model. The Axis features dual humbucking pickups and the trademark Music Man bolt-on neck.

The Albert Lee is a design unto itself. A signature model, it has a very retro feel in its looks, back to the 50's in my opinion. It uses three single coil pickups similar to a Stratocaster configuration. Again, the standard 4 and 2 neck design is used.

To read reviews for any of these models, Music Radar is always a good source. Premier Guitar is also a good place for articles and reviews. Just do a search on each respective site for the info.

If you like Fender guitar designs, but prefer the tone you get from a mahogany body and maple top and dual humbuckers, you might want to consider a Music Man guitar. Head over to the Music Man website for a list of dealers. See if they have a dealer near to you so you can test out a Music Man.