Opposite the nut, the mechanism holding the strings is called the bridge, which is made up of a few components. The first component is the saddle, which is the point that the strings actually make contact. I relate the saddle to the same term in orienteering - the saddle being the dip between two hills - it's that groove the string sits in that keeps even spacing between the strings.

The purpose of the bridge is two-fold:

By 'setup' I mean getting the guitar into a playable state for you, based on what the main use will be. Generally speaking, when a store sells a guitar it should have the generic setup done, meaning the neck tension is properly adjusted and the intonation is set (see below). Most guitars will be set up for standard tuning. If the main use of the guitar will be for drop tunings, there are adjustments that will probably be needed to keep the proper string tension on the neck.

If the action is too low, your guitar strings will buzz when they vibrate. If the action is too high, it affects the playability of the guitar. High action makes it more difficult to press the strings down to the fret board. Both soloing and rhythm playing will be affected by high action.

The exception to this is when the guitar is set up for slide playing. A slide is usually glass or metal bar that is slid on the strings (but can be just about anything that produces the sound you're looking for). The slide rests on the strings as it is moved, and the strings are not actually pressed all the way down to the fret board.

And of course, the string gauge being used could have an affect on the guitar setup as well.

Anyway, back to the bridge.

Let's talk about the mechanics of the bridge. Generally speaking, the on an electric guitar the bridge will have some moving parts (the saddle being one) that are helpful in the overall tuning you achieve with your guitar. With acoustic guitar the bridge is typically stationary.

With electric guitar the presence of moving parts introduces a potential problem in maintaining the proper pitch at all points along the fret board. This is known as the intonation of the strings. When the intonation is out of balance, the string tuning is affected. You may have the string tuned perfectly when played open (just pluck the string without pressing anywhere on the neck), but if you fret a note along the neck and check the tuning, you will find the pitch to be slightly sharp (high) or flat (low). 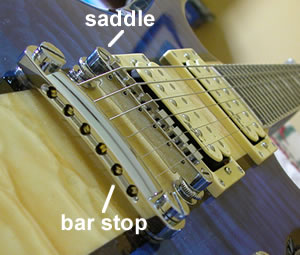 With bridges such as the Tune-O-Matic, which was first introduced on the Gibson Les Paul, you can adjust the saddle for each string to correct the pitch of the string.

It has a separate hard tail, or bar stop, where the strings are threaded through and the string ball end is seated.

The Tune-O-Matic bridge has also been used with guitars where the strings are threaded through the back of the guitar.

Tremolo bridges have similar saddle mechanisms to accomplish the pitch correction. Tremolos also typically have springs mounted inside the guitar body to counteract string tension, but the actual mechanics behind the various tremolo units is way beyond the scope of this article.

Personally, I'm not a tremolo guy - I prefer fixed bridges. Granted, that preference excludes me from doing "way cool" dive bombs and all sorts of other wild sound effects ala Joe Satriani  or Steve Vai, but I'm OK with that. I can do a mean "air guitar" dive bomb, though!

People are always looking for ways to improve on bridge design. For example, the Stratocaster tremolo design has been improved upon with the Floyd Rose floating tremolo design. The Tune-O-Matic bridge is an improvement over the fixed bridge that was adopted from the acoustic guitar. Even complete systems have been developed to address things like  intonation and action.

For example the Buzz Feiten Tuning System combines an alteration to the length of the fret board and nut placement along with changes to the saddles for intonation.

Another very cool innovation is the Gibson Robot Guitars. These use special motorized tuners and saddles made by Tronical.

In place of a tone control, there is a selector switch that has common tunings listed, as well as the ability to set a custom tuning. You just dial in the tuning you want and the guitar adjusts each string pitch appropriately. It also adjusts the saddle for each string to correct for any intonation issues.

In addition to the Les Paul model, you can find SG, Explorer, Firebird and Flying V Robot Guitars. The Gibson website doesn't make it real easy to find them, but they're there.

So there you have it - the bridge isn't just for crossing rivers! They are for helping to make sure your guitar plays and sounds as good as possible. And of course, without a bridge on your guitar, there's nothing to hold the strings!

Disclosure: Learn To Play Rock Guitar is potentially compensated for any product reviews. Also, if you choose to support this site by clicking links to advertisers, there may be payment.Click here for details.