~ with focus on the proper tuning ~

I've been looking for ways to get you some free guitar tablature. I want it to be accurate, but easy to learn and play. A key to that accuracy is knowing what tuning the song is played with.

One of the challenges I've always had when trying to learn a new song was knowing how to tune the guitar for the song. If the tuning wasn't standard, I couldn't figure it out. I was completely oblivious to alternate tunings. In fact, until a couple years ago, I wouldn't have ever thought about using an alternate tuning on my guitar. 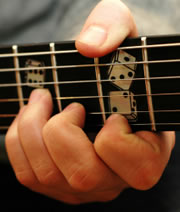 Well, I guess that's not 100% true - I was aware of strange tunings outside of the norm, but I thought they were only for old dudes from the 60's playing folksy tunes. Not for us rocker types...

Back in the day, we didn't have free guitar tablature available. We had to buy sheet music or figure it out by ear - playing it over and over again on cassette or vinyl until we got (I can't even imagine trying to learn a song using an 8-track!). If the tuning was different than standard, we just adjusted the song to fit standard tuning.

In the years that I played in bands, we never played anything outside of standard tuning. In fact, the subject of alternate tunings never even came up. I guess we just figured out the songs in standard tuning and didn't give it another thought. I mean, looking back now, I know bands were using these alternate tunings, but we must have just figured out ways around that without realizing. We were so clever!

Turns out most rock bands today will mix it up with different tunings to achieve different tones and sounds. Many metal bands write a lot of tunes in Drop C and Drop D tuning. You'll find a lot of bands tuning down a half step on every string.

The lower you tune, the heavier the tone. Heck, some even tune down to B on the sixth string. I have a hard enough time imagining myself playing in Drop C, let alone B! Not that I'm afraid to try it out, though. and we aren't even getting into the seven-string guitars here.

What I've decided to do is put together some song lists and free guitar tablature, focusing on what tuning the band is using for each song. For some, it's pretty easy because the band records everything in the same tuning. For others, they get a little tricky and mix two alternate tunings.

For example, 'Tonight' by Cartel is tuned in Eb (E flat). If you remember from the guitar tuning section, this is just tuning each string down a half-step. But then they get all nuts and change the tuning to a Drop Db. Actually, it's a pretty cool sound. But we'll cover that stuff in a bit.

For each of the songs I list out, I'll provide the chord diagrams and try to have guitar tabs as well. The plan is to also have audio/video, so you can hear/see what the song is supposed to sound like. Making free guitar tablature can be pretty tedious, so if I can find some shortcuts without sacrificing quality, I will.

On each of the above pages you'll get the lists of songs and links to the free guitar tabs as I get 'em put together. Any of you guitar heroes out there that want to help create some good free guitar tablature? Just fill out the form - I'll be happy for the help!

Back to the Online Lessons page…