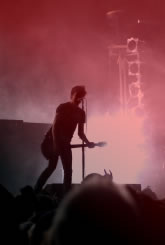 Naw, I'm not talking about the game - I'm talking about real guitar heroes. The men and women that MAKE the music. The ones that inspire us to learn and play guitar.

No matter who you like to listen to, these guitar heroes started out just like you and me, picking up the axe for the first time and something just feeling right. I'm not talking about a "Tenacious D" moment with Ronnie James Dio talking to me through a poster or anything like that. It's just, when you know, you know! Ya know?

Every one of your heroes had people that inspired them, causing them to keep practicing and working to get better.

The one thing that sets the heroes apart from being "just guitar players" is they take the time to own the guitar. You'd have to pry their cold, dead hands off their guitar to get it away from them. Some take the stuff they learn from their heroes and improve on it, give it a twist of their own. Others completely redefine a style.

Probably one of the best examples that sticks out in my mind is Eddie Van Halen. His signature two-handed tapping technique got lots of guitar players in the late 1970s pretty worked up. Van Halen didn't "invent" the technique, but he did master it and make it his own sound. And everyone wanted to play like him.

Today you have the new guitar heroes - guys like Slash and Kirk Hammett, Synyster Gates and The Edge. But once you start peeling back the layers, you start to realize these guys all have their own heroes and influences.

You wanna play like your hero? Find out what influenced them. Then go out and listen/learn and play that stuff. For instance, Eddie Van Halen really liked Eric Clapton; Joe Satriani was influenced by Jimi Hendrix.

Along the way, not only will you start to see your playing improve, but you'll also find you have a sound of your own. You'll start developing your style. Maybe you'll even turn out to be the one to turn the music world on it's ear with your new technique!

Here's a list of some past/present heroes of rock guitar. Some have been around forever, others have already made their way to rock guitar heaven, but all deserve a place here based on being able to represent:

Did I miss a famous player that needs to be added to the list? Send your suggestions for the greatest guitar heroes.

Tell Us About Your Guitar Heroes

Not all guitar heroes are famous. There are countless guitar teachers helping to inspire the new generation of rockers. Or family members and friends that cheer a new player on, giving them the confidence to keep practicing.

Who are your guitar heroes? Has anyone helped you stay on course as you've tried to master guitar? Here's where you can give them the recognition they deserve.

Whether they're famous or a local guitar teacher, tell your story - how do they inspire you? What have you learned from them? What did they do or say to keep you motivated to practice? Share it here!

Click below to read about guitar heroes from other visitors to this page...

His tone, style, and the overall way he played was innovative and inspirational to me as well as many other guitarists I've met.

I don't even need a reason, he's the greatest guitarist ever.

Allen Collins Not rated yet
Two words: Free Bird. The great Lynyrd Skynyrd guitarist left behind a legacy that makes him a guitar hero. His most memorable solo is the Free Bird ending. …

randy rhoads Not rated yet
He is just the best, the legacy he left with those songs will live until the end of time and longer. (Editor's note: Randy Rhoads passed away far too …

Pat O'Brien of Cannibal Corpse Not rated yet
his accuracy in his picking and ability to make low tuned heavily distorted guitars sound clear and defined is awe inspiring. He was first in nevermore …

Steve Morse Not rated yet
One of the hardest working musicians in rock music, Steve is an inspiration to me, not only as a guitarist, but as a professional, and as a person. From …

Benjamin Bunley(Breaking Benjamin) Not rated yet
Great rhythm guitar player and a brilliant singer/songwriter. Greatly influenced my musical interest as a whole.

George Harrison Not rated yet
Plays great guitar, writes beautiful songs, and brought plenty of different influences into the Beatles. While in the studio, it was usually either Paul …

Paul Gilbert Not rated yet
it's just that i don't see you mention the maestro of the guitar on the list he's just awesome man! (Editor's note: Visit the official Paul Gilbert …

Paul Leary Not rated yet
Uses the most twisted chord progressions you will ever hear. Editor's note: Paul Leary is the guitarist from the Butthole Surfers . To learn more about …

The Edge Not rated yet
Very inspirational guitarist, going by the term "Less is More." He can be quiet and low key when he needs to, but can also rock out when possible. (Editor's …

Ben Harper Not rated yet
So much emotion, so much skill... (Ed. note: you can get more information about Ben Harper at Ben Harper's website .)