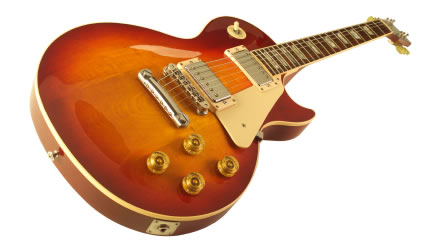 Today, August 13, 2009, we lost a rock guitar icon - Mr. Les Paul. Les helped design, and gave his name to, arguably the most famous rock guitar in the world made by the Gibson Guitar Company. He was known as the "Father of the Electric Guitar", and pretty much set the standard for every solid-body guitar ever built after his namesake guitar.

I'm not even going to try to write anything prolific here - there's no point. The Les Paul story has been told so much better than I can right here.

What I will do is tell you the influence Mr. Paul has had on me. When I first became interested in playing guitar, the electric body style I was familiar with was that of the Fender Stratocaster. In my memory, I don't remember having any awareness of any other electric guitar body style. I had a dreadnaught acoustic guitar, and had not paid much attention to electrics until I started getting serious about being in a rock band.

I borrowed a friend's electric guitar when I started my first band. It was a Strat copy. It worked out for a while, but I knew I'd need to get my own sooner rather than later. 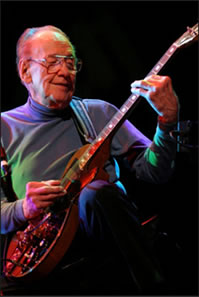 The guy we recruited to play lead guitar had a Les Paul. I got to play it and was immediately impressed by the design and tone. It had a deeper, richer tone than a Stratocaster, and it seemed more solid to me.

I guess I should quantify that last comment - I was drawn to the body style. I was very intrigued by the BC Rich Mockingbird.

That was my dream guitar. But as guitars go, BC Riches followed the Gibson design of solid-body, dual humbucker pickups and the neck was not bolt-on (BC Riches of the day were all hand-made with a neck-through design). Clearly the Les Paul was a large influence in solid-body guitar design.

The design wasn't just aesthetically pleasing. There were real technical innovations that came out of the work Les did with Gibson. The humbucking pickup was a new development created to help improve on some of the sound issues of earlier pickups.

I couldn't afford a new BC Rich guitar, let alone a Les Paul, and I couldn't really wait around for a deal to fall into my lap, so I started looking for something to get me closer to the tone and playability. I was drawn more to music that was typically played on Gibson models, so that added fuel to the fire.

My first electric guitar was a Gibson Sonex that featured a Les Paul body style made from graphite, rather than wood. It was a solid black matte finish, and if I remember correctly, I got it brand new for less than $400. And I was hooked - I haven't ever considered getting a Strat after that. And I'd still love to have a Les Paul. I never get tired looking over the catalogs that come in the mail. Some day...

I'll never forget my buddy always having great luck finding good deals on guitars. When I showed up at his house for practice one day, there he was with a gorgeous cherry sunburst LP Custom with gold plated hardware. Paid $350 for it - sick, I tell ya!

All that being said, I can't thank Mr. Les Paul enough for his contributions to rock guitar and music in general. His influence has touched so many musicians and enabled so much creativity, the world has lost a giant today. He will be missed incredibly by fans and the music world. Rest in peace, Les.

Back to Guitar Heroes...