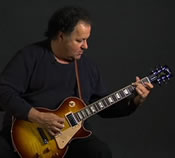 As promised, I've found another set of good guitar online lessons. I've mentioned the Gibson Guitar website before, but they just started a new set of lessons with a guitar playing legend – Mr. Arlen Roth.

While you might not recognize the name, most guitar greats have. Why? Because Arlen Roth has either played with them or taught them! This guy has toured with Simon and Garfunkel, played on tones of albums, and taught Ralph Macchio how to play guitar for the movie "Crossroads" (he played a dueling guitar part against Steve Vai).

He's also known for creating Hot Licks. Way back in the Jurassic Era when I was playing in a band (the early 1980's), you could get Hot Licks on cassette tape. Roth got the idea when one of his students moved away but still wanted the benefit of the lessons. Roth had started suggesting that his students tape the lessons and playing so they could track their progress.

He recruited many guitar stars to teach their techniques, including John Entwistle (The Who), Vivian Cambell (Def Leppard) and Andy Summers (The Police). Once VCRs got popular, he started doing video tapes of the lessons. That makes him one of the earliest providers of instructional videos. Of course, you can get them now on DVD...

Between Arlen Roth and the other artists that teach on the videos, all sorts of styles from rock to blues, country to jazz are covered. You can get them at Guitar Center if you want to. There are also Hot Licks videos for bass guitar and drums if your band mates want in on the action.

But now on the Gibson website, Arlen Roth is doing some exclusive guitar online lessons starting with "Beginning Electric Guitar". A total of seven video lessons over 88 minutes long getting streamed right to your computer – and that's just the first lesson!

This first guitar online lesson is set up especially for beginners. It runs down the guitar's anatomy in the first two videos, follow by three vids of the basic chords you'll need (like we've covered here on the Rock Chords pages). The last two videos run through some rhythms and scales – pretty important for building your guitar part phrasing.

I'm not sure if Gibson is planning daily or monthly lessons, because on one webpage a lesson is listed as a "Daily Lesson", and on another, it's "Lesson of the Month". According to their announcement, it's supposed to be daily. Not real clear, but no matter, they're free to watch as many times as you want, so they can call it whatever, right? We'll have to keep checkin' back.

Within these guitar online lessons, you might get the misconception that Mr. Roth is only showing you blues or jazz riffs, that maybe I'm steering you away from our beloved Rock, but it ain't true! Anything you can learn from a blues, jazz or country artist only makes you a better rock guitarist.

After all, rock was born from blues. Many of the famous guitar solos are derived from blues scales (think "Stairway to Heaven"), so learning the basics of blues can really improve your rock chops.

Once you master these basics, you can move on to some more advanced techniques that Arlen teaches. Again, you're going to get mainly blues instruction, but it all translates to rock – eventually. The key is you're learning the basic guitar-playing mechanics from these guitar online lessons. What you do with them to create your own sound is up to you!

You can also check out more info about Arlen Roth here at his website.

Back to the Online Guitar Lessons page...