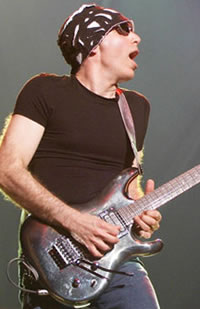 Have you ever thought about how cool it would be to take guitar lessons from Joe Satriani? Not only has this guy jammed with some of the most famous rockers alive, he's also taught some very legendary guitarists in their own right.

Just to name a couple of his well-known students, he gave lessons to Steve Vai who made his name playing guitar with David Lee Roth after Roth left Van Halen. Joe also taught Kirk Hammett of Metallica.

Since 1986 after Joe released his first album, the private lessons pretty much stopped, so we all lost our shot. But lucky for us, Guitar Player Magazine was looking out for our best interests.

Starting in the February 2008 issue, "Satch" started contributing to a new column called "Tips For Beginners". Hey, hey, right up our alley! I figure if we keep up with these columns and practice until our fingers bleed (JK), some of Joe's brilliance might rub off on at least one of us.

Actually, Jude Gold, one of the associate editors at Guitar Player Mag works through a series of interviews with Joe Satriani. Each month, Joe has tips and tricks that he used in teaching his students. Obviously, they worked not only for Joe but also the rock stars he trained and played with.

Like I promised at the beginning, I wanted to get you tuned in to the best lessons and tutorials I can find out here in the great wide Web. Well here's one of the best alive, so check these lessons out. I'll add new links out to GP Magazine as they become available. So here's what we've got so far:

10 Things You Gotta Do To Play Like Joe Satriani - Guitar Player Magazine again gives us some of the secrets behind Satch's success. Most of the tips involve some fairly technical information regarding chord structure and scale modes, but these are key to his sound and should be a hint to us the importance of learning and understanding guitar (and music) theory.

Another great site for Joe Satriani lessons and other information is foreverjoe.com. There is a small section of lessons taken from interviews, including videos (best to download and watch, rather than streaming over your internet connection, IMO). More of the technical stuff, and not necessarily put out there for us beginners, but these are lessons to aspire to playing.

If you're really interested in some full-on Satriani guitar lessons, you can check out video lessons at Satch Zone on Youtube. These are professionally-done videos recorded in a studio.

Back to Online Guitar Lessons...