How To Tune Your Guitar
Tuning Methods

When you're first learning how to tune your guitar, there are a number of different manual techniques you can use to get your guitar in tune. In the old days electronic tuners were expensive, so we learned how to do it manually. When you learn these techniques, you accomplish two things:

You've got to start out with at least one note as a reference. When I started learning how to play, I tuned with a pitch pipe that gave me all the standard guitar tuning notes: E, A, D, G, B, e. This is how I learned and remember them, from the thickest string to the thinnest.

What's kind of messed up about this notation is most beginner lesson books actually start with the high e string as the first string you learn. So it's sort of backwards. Eh, wouldn't be the first time I've been called backwards! 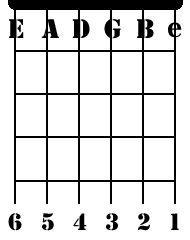 Just so you know, the standard guitar tuning is in the key of C. I know, I know, I promised I wouldn't get into music theory, and we're just learning how to tune your guitar here, so look at this as some bonus info... no charge!

If you want to stay low-tech you can also get a tuning fork, which is still kinda cool. If I remember correctly, my tuning fork was the A note for the fifth string. My guess is you'll want to get tuned sooner rather than later, so let's just use what we have available online right now.

Anyway, low-tech is pretty much out with the Internet having all the free, online "how to tune your guitar" tools available, unless low-tech's all you happen to have on-hand.

I haven't seen a pitch pipe or tuning fork in years. Maybe they still use them in school bands and orchestras, but it's been a really long time since I stepped foot in one of those classrooms. Most rockers are using electronic tuners today.

Hopefully, if you bought your guitar in a store, the in-house guitar tech (if the store has one) has set the guitar up. They would have handled making sure the action and intonation was set up properly. So now you just have to worry about changing the strings and keeping it in tune.

When learning how to tune your guitar manually (without a tuning program or electronic tuner), you've got to find either the low E or A note as a starting point. Like I mentioned earlier, if you have a tuning fork or pitch pipe, set your low E or A string to the same tone as the tuning tool you're using.

Another method to tuning a "starting point" string is to pick out a song you like and find a "tab" of it (Ultimate-guitar.com is a good place for tabs). Make sure the tab is written using the standard tuning (E, A, D, G, B, e). Look for a spot in the song where the fifth fret on the low E (sixth) is played. This is going to be the A note for tuning the fifth string (A). For example, check out this screenshot:

This is the very beginning of "When We Die" by Bowling For Soup. We'll use this as an example on how to use a song to tune your guitar.

Now open up your MP3 player of choice and start the song. While the song is playing, follow along with the tab of the song. When you get to the part of the song that matches this part of the tab, you will hear the A note, which will be the same tone as the A (fifth) string. 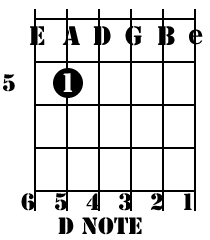 So now you have a starting point. You have your A string tuned.

Place your index finger on the fifth fret of the A string. The note you hear when you pluck the string is D, which is the tone of the fourth string.

Here's the diagram for the open G note on the third string. Your index finger placed on the D string at the fifth fret gives you the G note.

Keep working your way along on the strings until you are ready to do the B string. This will be a little different.

Once the G string ("Heh, heh, he said 'G' string" – OK, yea, a bad Beavis and Butthead reference) has been tuned, you'll do the B string. Instead of placing your finger on the fifth fret, move it down to the fourth fret to get the B note. Once B is tuned, you will move your finger back up to the fifth fret to tune high e.

Once the first five strings (e, B, G, D, A) are tuned, you need to go back and do Low E. You can use the E note on the D string as a reference note. Your Low E will be one octave lower than this note.

In this method, the harmonics on the fifth and seventh frets are used to tune the sixth (Low E) through the third (G) strings (the big "H"s in the diagrams stand for harmonics). You listen for the modulation in the harmonic on the seventh fret to determine when that string is in tune. The closer to being tuned the string is, the more the modulation smoothes out to a matching vibration.

Start first by getting your Low E or A string tuned in the same way you did with the last tuning method. Then use the tuned A string to tune the D string.

To produce a harmonic note, touch the string on top of the fret, but don't press down on the string – just a light touch. As soon as you pluck the string, lift your finger off the string.

You should hear a ringing note now.

Once the sixth through third strings are tuned, you have to change the tuning method a bit. You're still relying on string vibration, but without the harmonics.

For the high e string, you actually play the open B string along with the open high e string. Once your ear is trained to hear the proper tuning, you'll kow when high e is in tune.

I know, "a lotta help that is to me now!" I hear you saying. I'm working on a video to demonstrate this, so if you want to know when the video is ready, let me know and I'll shoot you a note when it's on the site.

Finally, to tune the low E string, you can use the harmonic at the seventh fret of the A string to match to the fifth fret on low e.

And that's how to tune your guitar by hand!

This is good practice, and I encourage you to learn how to tune your guitar "by hand," but for now let's go with some modern online tuning tools to get you up and running quickly. You can still start "hearing" the standard tuning in your head using modern tuning tools.

Sometimes old school is all you've got… suck it up and learn how to tune your guitar by hand – one day you'll be glad you did!

Back to the Guitar Tuning page...